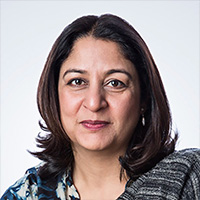 Safeena, a London School of Economics graduate, has worked extensively with rural and urban underserved communities in South America, Africa and Asia. After returning to India, Safeena chose the agenda closest to her heart – that of girls’ education – and founded Educate Girls. Safeena’s efforts to bridge the gender gap in education in India have been widely recognized. She has been conferred with the 2017 NITI Aayog’s Women Transforming India Award, the 2016 NDTV-L’Oréal Paris Women of Worth Award, and has in the past received the British Asian Trust’s Special Recognition Award from HRH Prince Charles for outstanding contribution in education. Moreover, Educate Girls has received the prestigious 2015 Skoll Award, 2014 WISE Award, the 2014 USAID Millennium Alliance Award, the 2014 Stars Impact Award and the India Development Marketplace Award in 2011 from the World Bank. Under Safeena’s leadership, Educate Girls initiated the world’s first Development Impact Bond (DIB) in education, a proof of concept that ties funding to outcomes. In 2018, on its completion, the Educate Girls’ DIB surpassed both its target outcomes by achieving 160% of its learning target and 116% of its enrolment target. The results are testimony to the fact that Educate Girls continues to deliver quality at scale and value to every single child in the program.